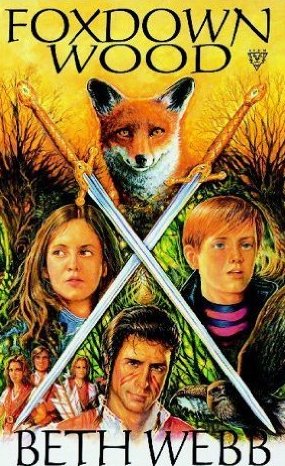 Beth Webb is an accomplished author of children’s and young adult’s stories. Foxdown Wood (1997) is one of her earlier books, aimed at a younger audience. It has narrative similarities to works such as the Narnia chronicles or The Bridge to Teribithia, but rather then being derivative is actually a refreshingly original take on the ‘other world’ story trope.

Cathy and her Mum have moved to Foxdown Wood – Cathy is resentful towards her mother for moving and for separating from her father. Next door is a young boy, Matt, who lives with his Dad who is a controlling but loving father.

Matt also has a secret, he has a wild ‘pet’ fox in the nearby wood whom he visits and feeds on a nightly basis. At first he is upset when Cathy stumbles across his secret, but soon the children become friends. And then Vix the fox leads them through a tunnel into a Gaelic-inspired world in political turmoil, where Arthurian-like characters are at war and where Vix can speak to the children.

The turmoil in the ‘other world’ however is parallel to the turmoil back in the real world. Greedy land developers are trying to clear the woods and build a subdivision, and the children are caught in between these two conflicts. They must save the woods in two different worlds at the same time.

This book is inspired heavily from Gaelic and Celtic mythology and draws from actual customs and beliefs in places. The ‘other world’ and it’s inhabitants are, perhaps, not developed as much as one would have hoped for, and the villains are quite two dimensional and almost cartoon-like.

But, this story ultimately is not about them. This story is about the children. It is a coming of age story as these two kids must overcome the changes going on inside them and around them. Their lives and relationships with their parents are changing, their own physical world is threatening to change around them, and they themselves are growing and maturing.

The book also has a secondary theme that is paradoxical to that of change – one of conservation. Conservation of environment and customs and heritage are important aspects of this book as well, lending themselves to important plot points and character arch development.

Though not a perfect read, it is an enjoyable book. The children are and places are well written. The rocky relationships with their parents avoid the cliched tropes found in most children’s books and are actually logical and consequential to the story. Stylistically there is nothing that overly stands out in this book, but it also means it can comfortably live on most bookshelves with it’s accessible language and brisk, engaging pace.

For more information, check out our interview with Beth Webb here.