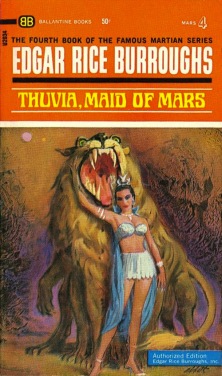 Edgar Rice Burroughs (1875-1950) was an American author most known for his jungle adventure stories of Tarzan and his Mars adventures about John Carter. Maid Of Mars was the fourth entry set on the world of Barsoom (Mars.) It was originally published in 1916 as a three part serial in All-Story Weekly,  but was eventually released as a full novel in 1920. Where the first three books were focused on the adventures of John Carter, Maid Of Mars follows the adventures of his son Carthoris and the Princess Thuvia of Ptarth.

Carthoris is madly in love with Thuvia but she is to be wed in an arranged marriage. In the mix we also have Prince Astok of Dusar who is also madly in love with Thuvia. In an act of desperate and selfish lust he kidnaps the princess and tries to frame Carthoris, hoping to start a war between the great nations that are already in an unstable political climate. Thus are Carthoris’s adventures instigated, and he travels across Mars in search of his Thuvia.

In his adventures he encounters the various races of Mars – unfortunately, as interesting as these races or their world could be, it is assumed by the author that the reader has already read the previous books. And so sadly the first half of the book was a struggle to read as it was overwhelming trying to wade through so many names of people and places but no context for who or what they were.

However, the book’s salvation came halfway in when the lost nation of Lothar, occupied by powerful telepathic beings, is discovered. This is where the book grabs the reader and pulls him back into the story. The once-peaceful Lotharians are a dying race, as their women and children have been killed in the war with the Torquas (green Martians). They were forced to adapt to the ways of war to defend themselves and weaponised their telepathic abilities.

With sheer imagination they can summon warriors to fight for them – these warriors are mere telepathic constructs who only exist because the enemy believes they exist. And it is belief that has structured the Lotharians philosophy and society. There is no easy way to describe the Lotharian philosophy without quoting the book directly:

“And the banths?” questioned Carthoris. “They, too, were but creatures of suggestion?”

“Some of them were real,” replied Jav. “Those that accompanied the archers in pursuit of the Torquasians were unreal. Like the archers, they never returned, but, having served their purpose, vanished with the bowmen when the rout of the enemy was assured.

“Those that remained about the field were real. Those we loosed as scavengers to devour the bodies of the dead of Torquas. This thing is demanded by the realists among us. I am a realist. Tario is an etherealist.

“The etherealists maintain that there is no such thing as matter—that all is mind. They say that none of us exists, except in the imagination of his fellows, other than as an intangible, invisible mentality.

“According to Tario, it is but necessary that we all unite in imagining that there are no dead Torquasians beneath our walls, and there will be none, nor any need of scavenging banths.”

“In part only,” replied the Lotharian. “I believe, in fact I know, that there are some truly ethereal creatures. Tario is one, I am convinced. He has no existence except in the imaginations of his people.

“Of course, it is the contention of all us realists that all etherealists are but figments of the imagination. They contend that no food is necessary, nor do they eat; but any one of the most rudimentary intelligence must realize that food is a necessity to creatures having actual existence.”

The concept here is fascinating, though underused in the book. An entire nation only exists because the few survivors imagine it to exist, and they only defeat the Torquasians because they believe they do. Their King, Tario, however does impose strict rules upon his dream-nation. No women or children are allowed to be imagined, and as a result the race is dying out.

Lothar was the crux of the story, and the latter half of the book a drawn out denouement where little happens that hasn’t happened in the first half: Carthoris, due to sheer luck and coincidence, encounters allies and defeats enemies through more luck as opposed to any particular skill or intelligence. Thuvia spends the bulk of the book in a constant cycle of being captured and rescued. This book was once Science Fiction, but science fact has sadly overtaken the concepts of advanced life on Mars and the types of technology described just sound primitive and inefficient, demoting this whole franchise into the realm of Science Fantasy.

This bulk is typical of classic science fiction pulp from it’s overrated hero to it’s treatment of women and races; it reads very much like a 1920’s book, and it is for that reason it was successful – it was exactly what the post-war reader was used to and exactly what they were expecting. Despite definitely being one of Burroughs less dedicated efforts, he did go on to write nine more Barsoom books as well as several cross overs with his other series.

Despite the effort to reach half-way point, the interesting concepts revealed in the middle of the book make for compelling reading. Burrough’s style keeps exposition and descriptions to a minimum and this helps maintain a brisk pace and keeps the action exciting. I would recommend this book to both fans of vintage and classic science fiction, and those who are unacquainted with classic fiction to see how far genre fiction has come.