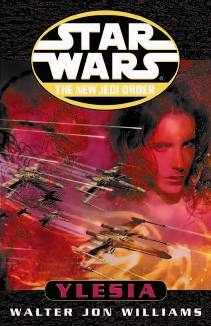 Ylesia is the sixteenth installment in the New Jedi Order series. Set in the Expanded Universe (now known as Star Wars Legends) it takes place approximately thirty years after A New Hope, though the EU/Legend stories are all now considered non-canonical since the Disney purchase of Star Wars. Ylesia takes place specifically between chapters 21 and 22 in Williams’ Star Wars novel The New Jedi Order: Destiny’s Way.

On the planet of Ylesia a group of traitors and criminals have set up a collaborationist government working in tandem with the devastating invasion forces of the Yuuzhan Vong. Inadvertantly finding himself leading these traiters is Han Solo’s nephew, Thrackan. The forces of The New Republic are planning a massive offensive to obliterate all collaborators on the planet and make an example of anyone that hinders the Republic.

Jacen Solo, Han Solo’s son, has a bitter resentment towards the Yuuzhan Vong, once being their prisoner. He proposes a raid into the heart of Ylesia’s capital, to capture the collaborators and hold them for trial and exile them offworld; a prolonged trial, he hopes, will extend the message that traitors to The New Republic will be held to account. What The New Republic doesn’t realize is that Yuuzhan Vong reinforcements have been sent, and the simple extraction of political officials turns into a full-on battle.

Not being familiar with this particular time-line in the Star Wars Legends universe, it took me a while to familiarize myself with the characters and settings. I didn’t read the blurb or synopsis and had no idea of what the book would be about. Once I knew the who and the what, the story became very self explanatory. Ylesia is a novella, so Williams doesn’t have page space to drag out character development, but does so efficiently with the time and word count that he has.

This is not a book filled with light-sabre battles and storm troopers – this is a more thought out political drama dealing with more complex issues, while still providing the expected stock of (limited) force-use, alien creatures, spaceships and explosions. It is an enjoyable book, despite doing very little to stand out, but it does nothing to really make me criticize, either. It is a genuinely good book, that left me wanting more. I wanted to know where these characters were going, what the consequences of the battle of Ylesia were. It was an unsatisfying ending for me, because I was left wanting so much more. Now that I know this is actually set between chapters in a larger Star Wars novel, I see now that I shall have to find and read this book as well. Like anything Williams writes, the book has excellent dialogue and action sequences, and you never feel lost in the excitement or confused by inconsistent characterization.

I recommend this book to Star Wars fans and rate it a 4/5. To download a FREE copy of this e-book follow this link here: Ylesia Download.