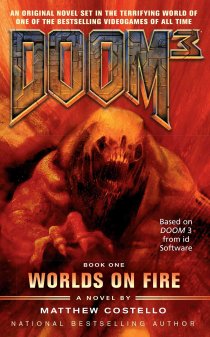 Matthew Costello has authored/co-authored under 30 novels and over a dozen video game scripts, including Doom 3. Set as a prequel to the genre-defining Doom franchise, Doom 3 explores the events leading up to Doom. For those unfamiliar with the franchise, it is easily summarized: experiments on a military base on Mars unwittingly open gateways to hell and the blood-thirsty denizens break-through into our dimension.

Being a huge fan of the classic Doom games I was excitedly expecting to read about the mechanized-horrors of hell’s armies pouring through to the barren industrialized world of Mars while the isolated troops stationed there get torn apart in a desperate struggle for humanity.

The classic Doom games were intense, fast-paced action-horror games – an amalgam of Dante’s vision of the inferno and Heinlein’s epic military science fiction. However, I was unprepared for the ultimately slow, character-based demi-thriller. I haven’t played Doom 3, and this change in pace and style was unexpected and, for me, was the biggest downfall of the book. Doom is a franchise synonymous with fast-pacing and I was excitedly anticipating the point where the story would get to this part… eventually getting there but only toward the very end of the novel.

This book left me disappointed, feeling more like an episode or an incomplete manuscript than a published novel. Unsurprisingly there is a sequel book, Doom 3: Maelstrom, that picks up where Worlds on Fire ends. Considering the smaller, almost novella size, of the book I feel a single larger entry would have been more successful than two smaller books.

But apart from the length of the story or my high hopes and expectations, there was nothing to fault with the writing itself, or the characters. There were several scenes toward the end that were genuinely creepy, and some of scenes building up to the climax were quite tense. I feel this book may be a more enjoyable read to those unfamiliar with the games who pick it up with no preset ideas or expectations. Like earlier novels based on the original Doom games the book has some departures, but not too many. Fans of the game might enjoy this book as it attempts to flesh out two-dimensional characters and provide backstory to their gaming experience, but ultimately it follows the game story and doesn’t offer much different or new.