Plague Ship is the second novel in a seven volume series about the Free Traders – A crew of Merchants that explore new worlds and make contact with new species to open up trade. The story was published in 1956, and though it is almost sixty years old now, it has aged gracefully.

Set within its own clear continuity, it makes no specific references to style, language or culture that could otherwise date the book. The story makes no effort to try to explain the precise intricacies of its scientific principles; a common pitfall of vintage science fiction that causes the stories to become nonsensical as our evolving knowledge of technology destroys their credibility.

The first chapter does an amazing job setting the scene on the strange and exotic planet of Sargol; its strange cultural practices, its beautiful scenery and its interesting people. Dutiful and honour-bound, the crew of the Solar Queen are all likable and well-written characters. The antagonists are the IS – InterSolar – an interplanetary trading conglomerate that uses corrupt bureaucratic processes and corporate espionage to undermine their competitors and secure trading rights

At its heart this is an under-dog story. It is a tale of over-comming obstacles and challenges, and the battle of truth over injustice. This is a theme we can all relate to at some point in our lives, whether it is in our youths or in our adulthoods.

The story is well paced and broken into three Acts. The first Act deals with the inter-relationships between the Solar Queen, the IS agents trying to sabotage their trade negotiations, and the Salariki – the native inhabitants of Sargol – and there is plenty of well-written exploration of the Salariki culture and their environment.

An interesting species, they remind you of the Na’Vi from James Cameron’s Avatar – a strong, lithe and cat-like alien species that lives in balance with their surrounding environment. An interesting and unique part of these people is their sense of smell. It is so strong that it has guided their cultural evolution, and their customs and currency all revolve around scent and aroma.

The second Act deals with their travels in space as they leave Sargol behind and return to Terra to sell their acquired commodities. It is during this time they begin to fall ill and are labeled by the IS as a Plague Ship. This creates all sorts of conflicts as they have limited resources, their crew numbers are dropping, and they are contractually bound to complete their trade or they lose the sole trading rights to Sargol and forfeit a fortune and are potentially black-listed. 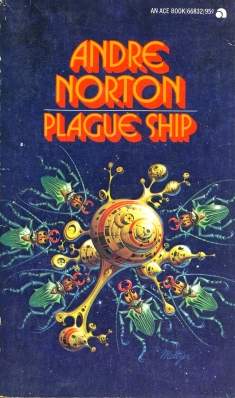 The pace becomes faster as they try to meet the trade deadline whilst struggling to solve the growing mystery of the plague. The plague itself was well-written and keeps you guessing throughout the story as to its origin or cause. Ideas and concepts from the start of the story are reintroduced here and this makes the story feel well rounded.

The third Act is a departure from the first two as it deals with bureaucracy and politics and the legal ramifications of the actions the Solar Queen’s crew in their struggle to survive. There are some nice action scenes in the climax, and then a short but satisfying denouement: the heroes are rewarded, the antagonists get their comeuppance, and the final lines are a tidy segue into the next book:

“Thank the Spirit of Free Space there’s practically no trouble one can get into on a safe and sane mail route!”

But Cargo-Master Van Rycke, in spite of knowing the Solar Queen and the temper of her crew, was exceedingly over-optimistic when he made that emphatic statement.

I have read this book several times over the years, and I think each time I read it I enjoy it a little bit more. As previously stated, the characters are likeable and, most important, they are relatable and realistic and so are their actions.

Andre Norton was always a master at creating colorful worlds and creatures and she knew how to make them co-exist in believable ways, and I highly recommend this book for any fan of Science-Fiction or Fantasy.